Name: Emanda – “Wall” or possibly “To Cause Pain”

Emanda is the undisputed authority in Kilimary. His presence changes everything. This is the guy who, when I first met him, was wearing nothing but a loin cloth and owning it–this after having just arrived from walking 25K that morning. This man, who was town president before his brother took over, used to be known as a wild animal and, when the people of Kilimary decided to make him their president, they had to go into the forest to find and convince him. As Grant says, “Dude’s a BA Baracus.”

Though he is not the oldest, Emanda is the leader of the band of brothers which governs Kilimary and held the position of village president before. Now, he acts as a bouncer of sorts. He goes around to the different cultural gatherings for the purpose of keeping peace and restoring order. He is a man of many connections and is the face of Kilimary, their representative when anything happens. Any big decision affecting the town is run through Emanda. Emanda is also perhaps the biggest evidence of life change as his custom before was to kill anyone acting stupid enough to cross him. 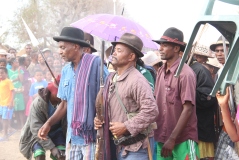 Yet now, after letting the Bible stories Grant has shared with him change his life he sees his role as one of peace, putting things to order as a believer in Jesus. He has told us before he identifies with the story of Paul, a man bent on destruction changed by an encounter with Jesus. He acknowledges he has never seen God but believes the stories we tell and the answers to prayer he sees around him are coming straight from God. However, with Emanda constantly going around to different cultural gatherings there is always the temptation to appease friends, culture, and tradition and engage in the customary sacrifices (and such). Or . . . it presents Emanda with the perfect opportunity to effectively and powerful share what Jesus has done for him and lead others to him.