If y’all are anything like us, the exile part of Biblical history is the haziest. Even in our Bible story sets we love and use in our ministry in Madagascar, we basically jump from King David to Jesus, with a brief stop to hear how Isaiah predicts Jesus.

But in terms of Israel’s story–the story of the descendants of Abraham–exile is a critical epoch, a fulcrum. Much like how we view our own wars as Americans, or 9-11, or, now, COVID-19, the exile is a major historical event for Israel that divides her history into two parts: pre-exilic and post-exilic.

So, we want to give some brief background info and starting definitions as we try to dive deeper into the words of the prophets around exile. If you want to go further in your study, here are a couple of great resources to explore:

In the meantime, here are some ideas to get us started.

Exile connotes the loss of all that is familiar and comfortable. Emotionally, it is characterized by confusion. In the Bible, exile starts in the Garden of Eden, when humans decide to define what is good or bad on their own, without God. As a result, they can no longer live with God and they are cut off from him, Eden, and life itself. But God promised to bring them home and defeat their enemies through another person.

God promised Abraham, one specific human, he would bless the world through him. Though he told Abraham to leave his home, he would give him another home in the Promised Land. Year after year, people waited for God to bring them home to this place. And though God continued to work through people (like Moses) and save Abraham’s people from death, slavery, etc., they never quite got back to the Garden. Eventually God did come to live with them. They finally made it into the Promised Land. They built a flourishing empire under some good kings—like King David that made people believe that perhaps everything was coming back together. But it wasn’t to be.

God had already warned them that their people would continue to do things their own way, and it would lead to ruin. The one kingdom split into two, the Northern and Southern kingdoms, and people began worshiping everything but Yahweh their God. God continued to use people, prophets, to try and rescue the nation from itself. But eventually, both Israel and Judah were attacked, defeated, and exiled by other nations. And the hope became that, somehow, God would not only return them to their Promised Land but come to live with them and rule over them again.

The Divided Kingdom: North and South

Under King Saul, then David, and finally Solomon, the Hebrew people had been a united nation. However, due to bad leadership, buried tensions resurfaced and the nation split in two. The Northern Kingdom was known as Israel, as it comprised most tribes from Israel. The Southern Kingdom was primarily the tribes of Judah and Benjamin, with Jerusalem still as its capital and, importantly, the temple where God lived. The Southern Kingdom was called Judah. To centralize spiritual power, the kings of the Northern Kingdom made a new capital in the city of Samaria, and a new temple in the city of Bethel. The temple at Bethel was home to a golden calf idol that Northern Israelites worshiped as Yahweh.

Israel’s capital, Samaria, was sacked in 922 BC by the Assyrians, and the people of the Northern kingdom were either enslaved back in Assyria, or culturally assimilated with others imported into the territory. Assyria tried to conquer the Southern Kingdom at this time as well, but God prevented it.

Judah’s destruction was a slow burn. First, in 587 BC, the Babylonians forcibly removed all the most educated people and exiled them to Babylon (think of Daniel and his friends). Then, when Babylon’s new territory would not submit, they completely razed the city in 593 BC.

Beginning with Moses, Israel needed a go-between. Moses is the prototypical prophet: speaking to God’s people on God’s behalf, but also empowered and used by God to deliver his people. In this way, prophets, and those of their ilk, are always a partial fulfillment of God’s promise to defeat evil through the “seed of the woman” (Gen 3:15).

Later, Yahweh began the tradition of communicating with the nation of Israel through these prophets. Through men and women like these, God tried to pull the nation of Israel back from the brink. Perhaps the most important thing to remember about prophets, whether then or now, is that they were not officially part of either the ruling class or the religious class—they were not priests or kings. They could be anybody. They stood outside of these as a third eye of sorts, a way for God to hold his people, and especially their leaders, accountable.

It’s also important to remember that although we know these people as true prophets today, they were not acknowledged as such during their lifetime. Prophets and messages of all kinds existed during this time, both good and bad, true and false. Often, the things they warned of happened after they were gone. In this way, prophets are usually honored—acknowledged, even listened to—in hindsight. 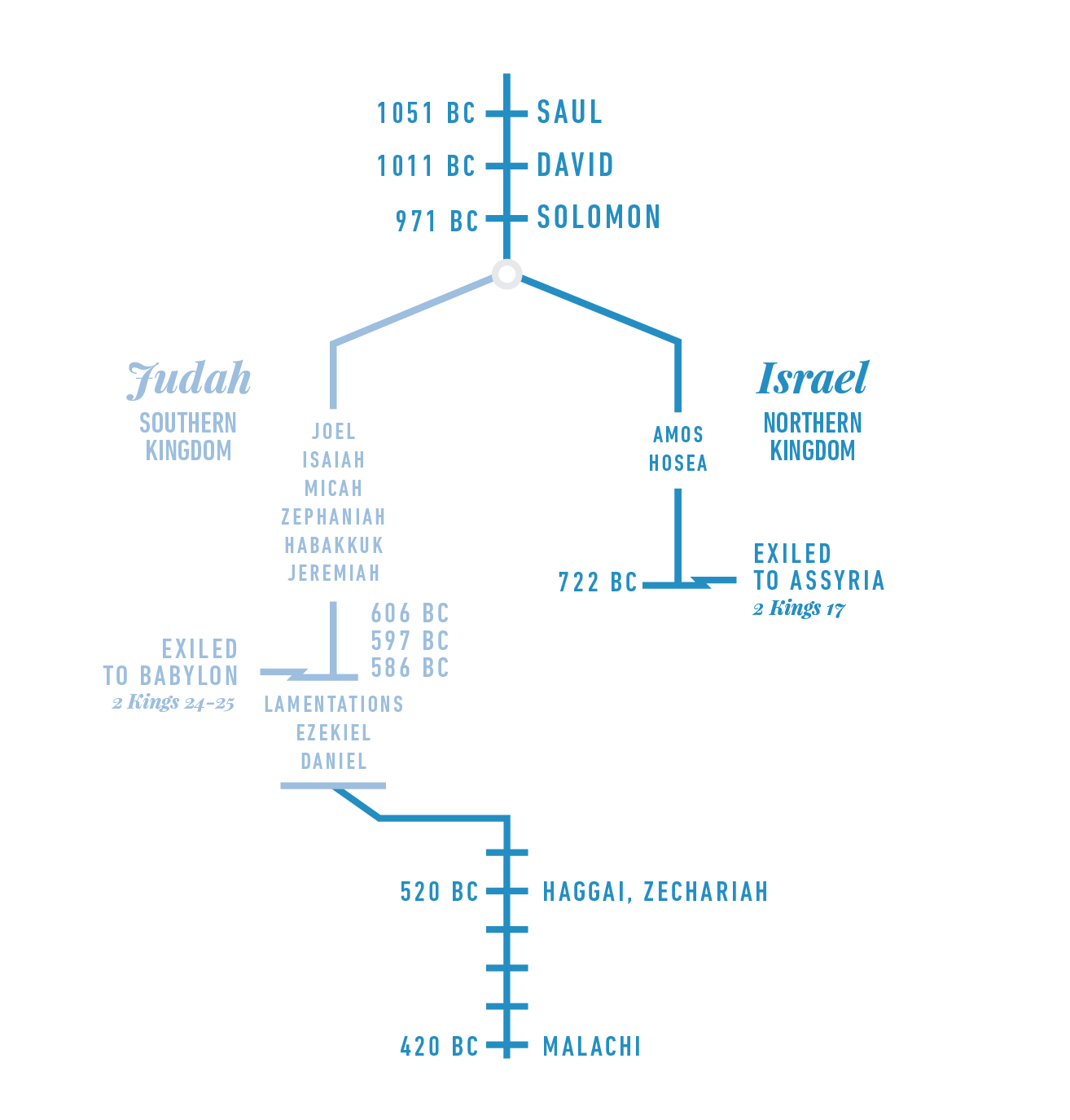 But it is also the story of profound hope. Not the kind of hope that only glimmers when the sun is shining, but hope that radiates out when all is darkness. God is always calling his people back, sending them prophets to hold them accountable and remind them of his promises. Ultimately, the exile is how God prepared a nation for the Messiah, Jesus. You see, all God ever wanted was a human through whom he could bless the entire world. So eventually, Jesus comes to be that human, through whom God would start to bring everything back together.

“These things happened to them to serve as an example, and they were written down to instruct us, on whom the ends of the ages have come. So if you think you are standing, watch out that you do not fall. No testing has overtaken you that is not common to everyone. God is faithful, and he will not let you be tested beyond your strength, but with the testing he will also provide the way out so that you may be able to endure it” (1 Cor 10:11-13, NRSV).