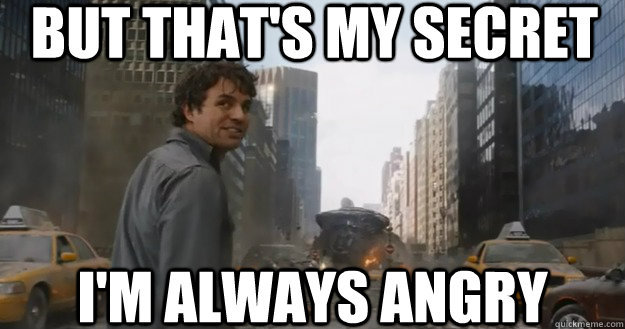 One of the many cool scenes in the original Avengers movie was when Bruce Banner instantaneously transforms into Hulk. He doesn’t have to get worked up into a rage . . . he’s always angry.

It was so cool in the movie. But it sure ain’t when you’re a dad blowing up at your 3 year-old daughter.

I’ve been reintroduced to my anger since all this happened. I honestly don’t know what exactly it is. Is it the constant low-level stress of all this? Is it because we’re spending more time around each other? Honestly, it doesn’t matter why. I have been reminded that no matter how I like to think of myself, there is a hidden current of anger right below my surface. I’ve seen it surface it Chyella too, and I know exactly where she got it!

As I read Matthew 5:21-26, I was also reminded of this Mere Christianity passage:

“And the excuse that immediately springs to my mind is that the provocation was so sudden and unexpected; I was caught off my guard, I had not time to collect myself. Now that may be an extenuating circumstance as regards those particular acts: they would obviously be worse if they had been deliberate and premeditated. On the other hand, surely what a man does when he is taken off his guard is the best evidence for what sort of man he is? Sure what pops out before the man has time to put on a disguise is the truth? If there are rats in a cellar you are most likely to see them if you go in very suddenly. But the suddenness does not create the rats: it only prevents them from hiding. In the same way the suddenness of the provocation does not make me an ill-tempered man; it only shows me what an ill-tempered man I am . . .”

What C. S. Lewis reminded me of is I am angry. It has nothing to do with the corona crisis . .  it’s just me. As our pastor illustrated recently, when you put pressure on a lemon by squeezing it, what’s inside comes out. We’re all being squeezed right now and anger is what is coming out of me.

Have you all found yourselves making excuses, anger or other things? I have to take my anger (and whatever else comes dripping out of me) to Jesus. As Lewis continues . . .

“And if (as I said before) what we are matters even more than what we do—if, indeed, what we do matters chiefly as evidence of what we are—then it follows that the change which I most need to undergo is a change that my own direct, voluntary efforts cannot bring about” (155).

What I primarily need is Jesus to do what I cannot and fill me with rivers of living water that overflow the banks of my hidden anger.